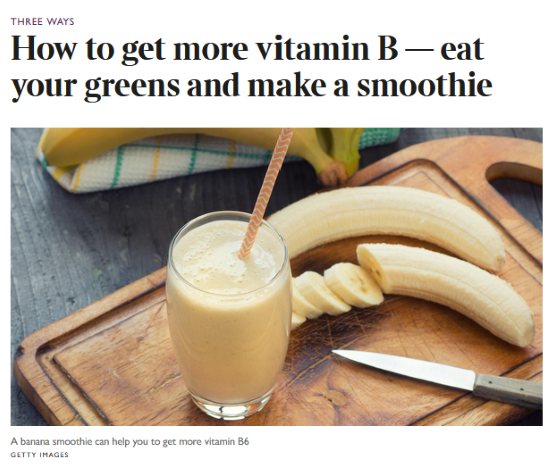 How to get more vitamin B- eat your greens and make a smoothie.

Too little can cause megaloblastic anaemia. “This is where your blood cells enlarge so that they can’t carry oxygen around the body,” says the nutritionist Dominique Ludwig. “You will feel exhausted and a blood test from your GP or a urine test is important for diagnosis.”

Our body’s ability to absorb vitamin B12, needed for healthy nerves and red blood cells, to use the energy from food and for brain function, drops with age. “Around 70 per cent of the UK population probably need to consume a bit more,” Ludwig says. “It also works synergistically with folate and vitamin B6 to prevent a rise in blood homocysteine levels, which is believed to be associated with an increased risk of heart disease.”

“You can get small amounts of B12 in fermented foods, and yeast products such as Marmite are a source, as are fortified soya products and breakfast cereals,” Ludwig says. “But it’s really non-negotiable that you should take a supplement containing up to 2mcg B12 a day if you are a vegetarian.”

Get as much as you can from your food, from poultry, pork, fish and whole grains, Ludwig says. “Meat, fish, poultry, fortified soy products, nuts and lentils all provide B6,” she says, adding: “It’s also found in bananas, citrus fruits and avocados, so a smoothie is a great idea.”.