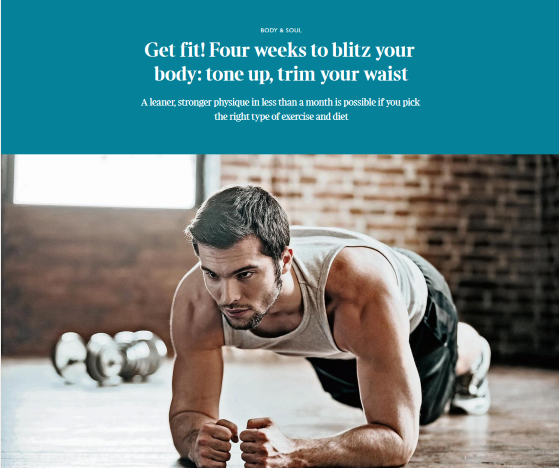 Get Fit – Four weeks to blitz your body: tone up, trim your waist.

A large glass of wine (250ml) contains about 230kcal, which is about the same as a homemade chocolate cupcake or three chocolate digestives If you are serious about getting into shape, you will need to cut out all alcohol for two weeks and then allow yourself no more than two drinks on two nights per week.

“I suggest people do this by swapping healthy carbs for half an avocado at some meals,” says Dominique Ludwig, a nutritionist who works with Hollywood stars to get them into shape for filming. “Avocados aren’t low-calorie but will cause less of a blood-sugar spike than carbs, so can be helpful in sustaining appetite.”

Most of us eat more carbs than we need, and we should always start by cutting out the refined and processed variety — that’s your white bread, pasta, croissants, fruit juice, refined cereals and white rice — to shed pounds. “Carbs release their energy, in the form of glucose, very quickly into the bloodstream and when our bloodstream gets flooded with too much glucose, we are more likely to store it as fat,” Ludwig says. “Refined carbs are the worst offenders and act as rocket fuel in the body.”

Quinoa, oatcakes, sweet potato, puy lentils and wholegrain rice are all good carbs switches, although even they should be limited. When her clients embark on a 28-day weight loss plan, Ludwig recommends they eat no more than one quarter of a plate, or 2-3 dessertspoons, of healthy carbs at any main meal.