The trouble with most gluten-free breads is that we are trying to recreate the structure of gluten to make a loaf that is comparable to traditional bread. This is why gluten-free foods often fall short. If we are trying to recreate a springy, light bread, we might just be setting ourselves up for failure as the results are likely to be sub-standard.

Thinking outside of the box is often a better solution, rather than trying to play copy-cat with familiar family staples. If you think about it, most countries have their own specific type of traditional bread, ranging from German pumpernickel, French bread or a heavier Scandinavian sourdough. Every country is used to, and generally enjoys their own style of bread, meaning that it is likely that our taste-buds can be flexible and can potentially be re-trained to enjoy other tastes and textures. Are gluten-free breads healthier? Well, not all gluten-free breads are created equal – let’s explore why.

Why has Bread Become so Unhealthy?

It is also worth noting that most of our traditional British supermarket bread has now become what is known as an ultra-processed food, rather than the ‘staff-of-life’. This is because modern manufacturing techniques have sped up the production process to make it both faster to produce and also more profitable. This means shorter prove times and an ingredients list that is often unpronounceable.

Traditional bread is made using the whole wheat or rye grain and is fermented over a longer time-frame using a sourdough starter as a slow raising agent. One of the hidden benefits of this process is that this fermentation naturally breaks down the gluten, making it more digestible in the gut while giving it a slightly sour and tangy flavour. Additionally, fermentation breaks down some of the nutrient-blocking phytates. These are naturally occurring compounds found in grains that can bind irreversibly to certain nutrients such as iron, zinc and calcium and can otherwise prevent them from being absorbed. The gluten also develops while the dough ferments, so that it still gives a springy and airy loaf.

Modern bread is mostly made using refined, low-fibre flours, whereas white bread flour is fortified with certain B-vitamins, iron and calcium. This has been the case since the second world war. This was a measure introduced to prevent deficiency diseases, such as rickets during rationing. Healthier wholegrain flours do not require fortification as they are generally considered a better source of nutrients than their white, polished counterparts. Gluten-free flours are also exempt from mandatory fortification, despite being nutritionally inferior and mostly made from white, refined starches.

It was only around 10,000 years ago that human beings began to cultivate and consume wheat. As a race we survived prior to this without any wheat or gluten. This is not to say that everyone needs to be gluten-free, they don’t. However, if gluten or wheat upset your digestion, if you have a coeliac condition or its close relative non-coeliac gluten sensitivity, then you might be looking for a healthy wheat/gluten alternative.

Gluten is a general name for the protein found in wheat, barley, rye, spelt, kamut, freekeh and oats. It is highly elastic and helps to hold the bread together while making it light and springy. It seems that more people are finding gluten or wheat to be problematic to their health, and that the alternatives available are often poor quality. Gluten can evoke an antibody response with far reaching consequences for sensitive people, especially those with certain digestive ailments or autoimmune conditions. However, even those with IBS (irritable bowel syndrome), often characterised by bloating, discomfort/pain, gas, intermittent diarrhoea/constipation, or both, sometimes benefit from eliminating wheat from their diet.

Is Gluten Always to Blame?

Rather than the gluten always being the problem here, it is often the fructans in the wheat, otherwise known as fermentable oligosaccharides, that are prone to fermentation by our own gut bacteria leading to the production of gas and many of the above mentioned symptoms. It may not be that wheat per se has led to this problem, but rather the industrialisation of the bread-making process, the ubiquitous nature of wheat in our food supply alongside poor gut heath, the standard western diet and certain medications that can also negatively affect our gut microbiome.

Supermarket gluten-free breads are therefore mostly a concoction of highly refined, fibre-less starches, cleverly bound together with a variety of gums and stabilisers. They also do not have to be fortified with additional nutrients. These breads are also high-glycaemic, ultra-processed foods which do little for our nutrient requirements or our gut health. Although, in their defence, some manufacturers do now fortify their breads with added B vitamins and minerals, so read the labels!

I prefer a naturally gluten-free loaf made almost entirely of nuts and seeds. This produces a heavier loaf, more akin to a Scandinavian style bread, better suited to an open sandwich, but one that also tastes amazing as a side with a soup or salad. It also toasts remarkably well. So here is the thing; seeds and nuts contain a wide array of nutrients that makes this bread nutrient dense. This is because seeds and nuts are essentially the powerhouse from which a plant grows. In the same way that eggs provide everything a growing chick requires for development, seeds and nuts contain everything a plant requires to flourish and grow. This bread doesn’t need fortifying with a mineral and vitamin mix, because the nutrients are already there, in their natural, easy to absorb form.

So…let’s talk about my MULTI-SEED LOAF!

This has taken a while for me to find a good gluten-free loaf that is healthy, nutrient dense, tastes amazing and is easy to make. Seeds and nuts are generally a very good source of proteins and amino acids as well as healthy polyunsaturated and monounsaturated fats. The protein content is actually similar to wholegrain bread, but the balance of amino acids is slightly better balanced. This loaf has a higher fat content than traditional bread, which makes it more filling and leads to less snacking between meals. In addition, seeds are a rich source of fibre (both soluble and insoluble) and contain measurable amounts of B vitamins (except for vitamin B12), zinc, magnesium, calcium, iron, selenium and manganese.

Since the macronutrients are more balanced in seed bread, the carbohydrate level is lower. This loaf is free from refined or processed carbohydrates, which can help to keep our blood sugar levels on a more even keel.  We know that unbalanced blood sugar levels can lead to weight gain and, over time, put us at increased risk of Type 2 Diabetes. Most people find that seed and nut-based breads are far more satiating. In short, this means that the nutrient dense seeds and nuts fill us up faster, but also reduce the likelihood of cravings that might otherwise lead to us raiding the fridge half an hour after our meal. This is because our body registers the proteins, fats and nutrients as ‘food’ and signals to the brain that the body has taken delivery of sufficient energy and nutrients to keep us going for the next few hours. Fats and proteins also take longer to digest and stay longer in the stomach which again reduces our appetite. Refined breads, in contrast, often upset our blood sugar balance, wreaking havoc with our energy levels and making us crave more food to cope with the corresponding blood sugar peaks and troughs.

For comparison, I have compared a slice of traditional wholemeal bread to a gluten-free bread and a slice of my multi-seed loaf. The multi-seed loaf comes out best, followed by a standard wholemeal loaf. Unfortified, gluten-free bread fares worse across the board being higher in carbohydrates and lower in fibre and nutrients. Some brands are fortified, but do remember that simply adding back vitamins or minerals, doesn’t suddenly make a processed food a superfood! Natural foods are always the best option. 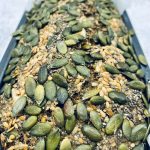 a few grinds of black pepper

A note about buckwheat and some alternatives

Buckwheat. Despite its name, buckwheat is gluten-free and not related to wheat at all. In fact, buckwheat is not even a grain and is more closely related to rhubarb than any other plant. While buckwheat is completely gluten-free, like oats it can sometimes become contaminated with traces of gluten during milling or transportation. Therefore if you have coeliac disease or are very sensitive, choose one that is certified gluten-free so that you can be sure that the gluten is under 20ppm.

Quinoa. If you are sensitive to buckwheat, use quinoa or millet instead.

Nuts and seeds: Apart from the chia or flaxseeds, which are important for the consistency, you can pretty much swap and change the nuts and seeds around as you choose in this recipe. These seeds help to bind the bread together, making it less brittle.

Apple cider vinegar. I know it seems like a lot of vinegar, you won’t taste it in the bread,  but it is in the recipe for 2 good reasons. 1. It helps the bicarbonate of soda to work, giving you a better rise. And 2. It neutralizes the taste of the bicarbonate of soda so that it is undetectable. If you don’t want to use apple cider vinegar, use lemon juice instead . You won’t taste it in the finished loaf.

Linseeds and flaxseeds are the same thing. These rolls taste remarkably ‘bread-like’ and are naturally gluten-free. The egg gives them a light and springy texture, similar to traditional bread. With no-proving time you can have these on the table in less than 30 minutes.

These are adapted from a Hemsley and Hemsley recipe. These rolls are great for those avoiding wheat and gluten and are a rich source of phytoestrogens which are thought to support natural hormone balance. The soluble fibre helps to feed the gut bacteria and keep everything moving along nicely in the gut. They are one of my most popular recipes with my clients.

TIP: try adding caraway or fennel seeds, turmeric, pepper or other flavours. I love salt and pepper in summer and warm turmeric in winter. These rolls also freeze well.

This recipe is another bread alternative and is fantastic served with a salad or a soup. It’s not bread, but if you serve this, I promise no one will ask where the bread is!

Sea salt and pepper to taste

Chop the Parmesan cheese into small cubes and process in a food processor or mini-blender until it resembles a fine powder. 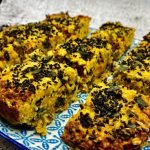 delivered straight to your inbox